The WiFi thermostat project exists in several versions, which are available on Githube in the repository of the whole project. Versions differ in functionality only in advanced usage options and remote firmware update options. The firmware is available in compiled - binary form, which is executable for the target platform. Therefore, it is tested in advance, compiled for you. The firmware is universal, which guarantees that it will work with the cloned binary program on all microcontrollers in the same way.

The free version is available only in the form of a compiled - binary program without access to an application written in .ino format.

To upload the binary program to the ESP platform, it is necessary to use the ESPTOOL tool. The tool also uses, for example, the Arduino IDE environment for uploading the program after compilation, or the development framework from Espressif Systems - ESP-IDF. For the ESP32 platform, it is necessary to hold the BOOT button until the beginning of the "Connecting ........_____....." recording process, or to do a pulldown on GPIO 0 (if the development kit does not have a BOOT button on the board ). An automated - executable .bat script is prepared in the folder of each firmware (it has a set COM port of the microcontroller set to COM7 for ESP8266 and COM17 for ESP32), which starts the enclosed ESPTOOL and loads the program with the specific firmware located in the given folder. 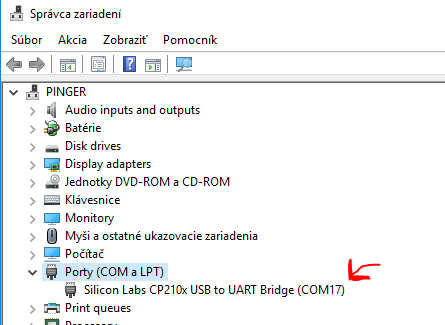 The destination COM port must be changed based on the COM port on which your board / microcontroller logs in - (can be found via the Peripherals and Drivers Manager on which COM port is ESP logged in). The ESP8266 microcontroller on the NodeMCU / Wemos D1 Mini development kits most often has a CH340 USB-UART converter and also acts in the device manager under this name. In the case of the ESP32 microcontroller, the most commonly used USB-UART converter is CP2102 from Silicon Labs - referred to as the CP210X USB UART Bridge. The program implementation for ESP8266 assumes that the board has loaded the basic parts of the flash memory - the partition table and so on ... The binary program is exclusively a thermostat application without other bundled parts of the program. After loading the program, the ESPTOOL program window automatically shuts down and performs a software restart of the ESP platform, which then boots the new firmware and prepares the WiFi thermostat for use. For the ESP8266 microcontroller, the firmware is written to the standard offset 0x00000 - (the partition table is not part of the firmware, it is not required). The firmware for ESP32 also contains a partition table that is written to offset 0x8000, the bootloader to offset 0x1000. The firmware itself is written to the standard offset 0x10000. 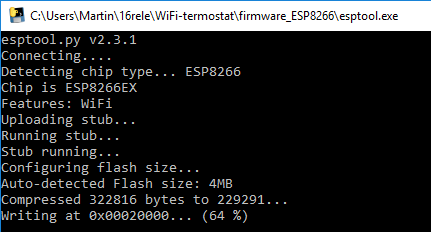 After successful loading of the binary program - firmware, the thermostat is fully ready for operation.

WiFi thermostat is uperational only after successful connection to your LAN network! After assigning an IP address for connectivity on your network.
After connecting to the home WiFi network, the ESP stops broadcasting the SSID, switches to STA (Station) mode and already works in thermostat mode The entered data about the WiFi network are stored in the flash memory of the thermostat and it is no longer necessary to enter them again when restarting the thermostat, power failure, device restart. If the network is not available, ESP will start broadcasting its own SSID again: WiFi_TERMOSTAT_AP and you can re-enter your credentials. The thermostat is available on its IP address (which it prints every 10 seconds also on the UART), or on the local mDNS -> http: //WiFi-termostat.local . The mDNS service only works after connecting to an existing WiFi network. Once the thermostat is transmitting its own SSID, it is not possible to access the device via a domain name. The program works on the basis of the project wiring diagram and the logic from the description. 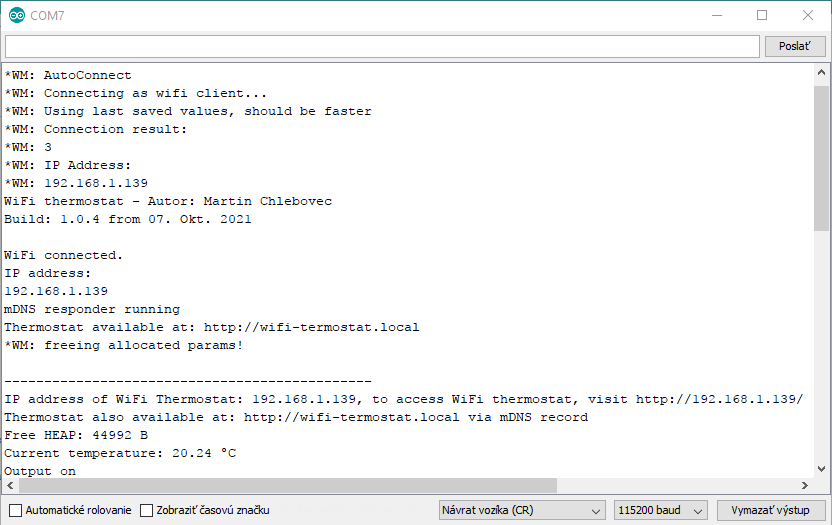